My final instrument is also outstandingly good, but it breaks the mould as its sound is English rather than tinged with French influence. This is especially the case where the reeds are concerned, and George Sixsmith’s insistence on staying within the bounds of J J Binns’ original concept is fully justified.

In 1926, J J Binns, provided a 3 manual organ for the Parish Church of Queens Park, Glasgow ,which closed in February 2000, but this historic organ has been rescued and given a new home. George Sixsmith & Son Ltd. have completely restored it and converted the actions to electro-pneumatic. The oak main case, which was designed by Andrew Sixsmith, is a fine example of British workmanship and is placed at the west end of the church. The Swell, Great and Pedal Divisions, together with the High Pressure Tromba unit, are in the main case, while the Choir Division is housed in a chamber behind the St. Werburgh Shrine, adjacent to the Altar steps. There is a digital transmission from a detached drawstop oak console, situated opposite the Choir Division. The organist can see and hear well.

At first I found the console rather intimidating. When I designed the new keyboards and controls in Chester Cathedral in 1991, as the Christie system offered so many opportunities, I wanted to take advantage of them all. Even before that, when the pistons were controlled by switches, I provided the console with as many playing aids as possible, but many have rarely been used, and the advent of multi-memories and sequencers has made them redundant.

At St Werburgh’s I’m sure that there is no need for 16 general pistons (8 would suffice), but the generals could be duplicated on both sides, so that they can be reached by either hand or by a registrant. It’s traditional and sound sense to leave couplers free on divisional pistons, and most systems leave them unaffected, but Musicom have provided facility to set them ON, OFF, or NEUTRAL. I found the Set Free piston to be a joker - it neutralises couplers on the divisionals, but is fiddly to set (bearing in mind that the couplers are with the departments they augment, so are spread around the console). Having set up quickly, and failing to appreciate its importance, I watched with horror (playing “Nun Danket” at a wedding) as all the pedal couplers and Swell to Great withdrew themselves every time I pressed a Great piston! An easy cure would be reverse the function and have all the couplers default to neutral on divisionals and have a Set Couplers piston to enable them to be set on divisionals only if required. This console had another joke at my expense, as, later on, I used the transposer to help a singer who had a bad cold. My laziness rebounded on me, when I heard Widor’s “Toccata” come out in E major instead of F! The transposer ought to cancel automatically on the General Cancel!

I’m sure that the fewer toe pistons there are, the easier it is for the player to find his way around, but English solo music and many accompaniments make it imperative to have toe pistons for Great and Pedal on the right of the swell pedals. Here the pedal pistons are on the far left and, if one is to play many accompaniments, or Elgar’s Sonata in G, the only solution is to grow two left legs! Why not put control panels in drawers at the sides, too, to enable the music desk to be lower and simplify the appearance? Eventually I found the organ very easy and rewarding to play, despite long distances between this superbly constructed console and all the pipework.

The sound is magnificent, and the tonal finishing is immaculate. The Great chorus is dignified, but bright and clear, while the softer stops respond to the acoustic of this superb building with a luminous glow. I admire the finest French reeds greatly, particularly those of Cavaillé-Coll (who created sounds that evoke the finest of red wines), but it’s refreshing to find an instrument with reeds, English in style (as at Crediton or Tooting Graveney), which have richness of tone and a Rolls-Royce polish on them. In this regard, the Tromba unit is supremely fine, without being in the least fat and it adds a wonderful majesty to full organ. The whole organ reflects the utmost credit upon J J Binns and George Sixsmith and Son Ltd. We should be proud of our contemporary British organ builders, they have a lot to offer!

Reproduced with kind permission of the author - Roger Fisher. 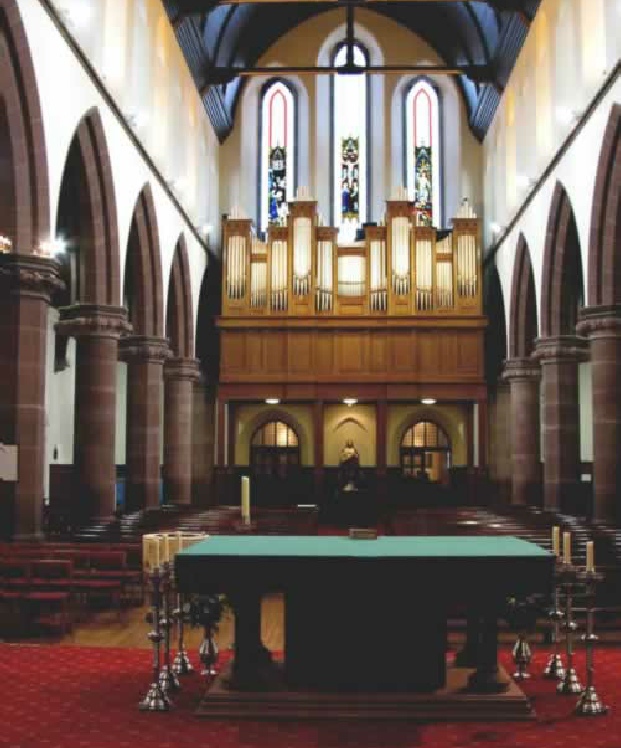 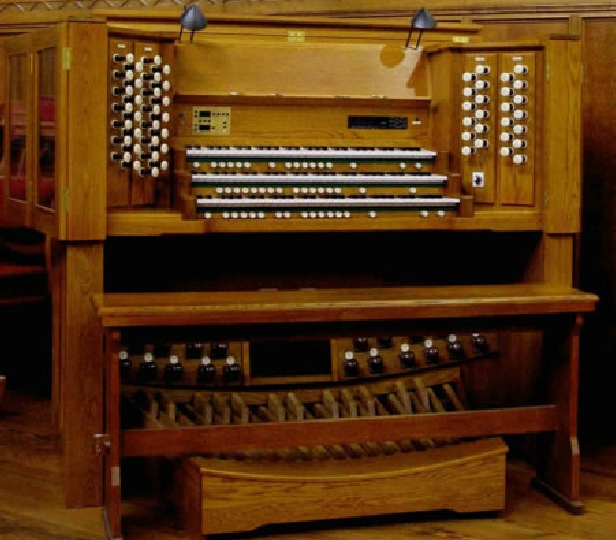