This instrument, built by Hill, Norman & Beard Ltd in 1976 has always seemed to me to be one of the best instruments from the classical revival era. While many instruments of that period gave us a cold clarity, which tallied with the objectiveness of their stop-lists and much of the architecture of the period, this one has always been notable for its beauty of tone and a gentle warmth which also reflects the warmth of the people who regularly attend this contemporary building.

Hill’s instrument served the church well for 25 years, but the effects of wear and tear then began to show and several builders agreed that the touch would be better if the leverages in the mechanical action were changed. George Sixsmith & Son Ltd. were appointed to restore the organ and aluminium rollers were replaced by new ones made of steel, while wire trackers were replaced by wood. A leverage ratio of 4 (at the keys) to 5 at the pallet, was reversed to 5 (at the keys) and 4 at the pallet; this resulted in a considerable improvement in the touch. Andrew Sixsmith’s initial training in engineering was a considerable benefit here and there are no consequent disadvantages, as the pallets are large enough to provide ample wind for the pipes.

As consultant, I encouraged Sixsmiths to go further and replace the inconvenient hitch down pedals for the couplers with knobs and to replace the original electro-mechanical capture system with a modern solid-state system (Shaw Organ Systems, Canada). Care was taken to ensure that the console would look uncluttered and be simple to operate. The General pistons are on the right, four under the Swell and four under the Great, where a registrant can press them if help is needed, but to have provided a Sequencer would have been over-kill in an organ of this size.

Tonally, little was changed, but H N & B had put five tapered (stopped) pipes at the bass of the Swell Spitz Flute and these were replaced by open pipes. There was a common stopped bass, too, for the 8fts and this was the more obvious because the break in the Salicional came at Tenor C. It has always seemed to me that, if this deplorable practice must be adopted, then the break should come at FF, where it would be much less noticeable. Better still (remembering that Arthur Harrison used Geigen basses for his Harmonic Flutes) would be to have a Harmonic Flute and mild string as the two 8fts, as these could have a common open bass which would be a reasonable match for both ranks. Andrew Sixsmith readily agreed to my request for the addition of twelve bass pipes for the Salicional, but space proved to be rather tight, so he adopted an ingenious solution (suggested by David Frostick) of using narrow scaled full-length pipes down to FF and then using very quiet 4ft (string-toned) helpers to the stopped bass for the bottom 5 notes. This compromise is a complete success, as the effect is of a string bass right down to the bottom when the organ is heard from the floor of the church. 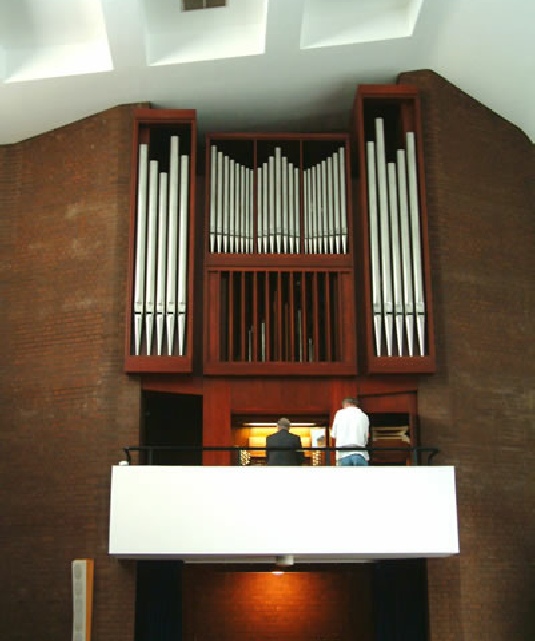 From a tonal point of view, I can’t see any point in putting a 4ft reed on the pedals of a small instrument, for the sake of the few chorale preludes which may require it, in places where pieces of this kind are rarely likely to be played. A 4ft Fifteenth or Choral Bass would have been much more useful, but, at the restoration stage, there was not enough space to effect an exchange. However, the skilled attention given to the reeds by David Frostick has ensured that they all blend much better than before. The other notable point is HN & B put in chorus a Quint 1Qd, rather than the more conventional Larigot. They were, no doubt, mindful that the French Larigot is a flute, chiefly to be used in the Tierce en Taille and not a chorus stop suitable for an Anglo-German style of organ. The balance between manuals and between manuals and pedals is excellent and the swell has more warmth than is usually associated with a Brustwerk. The only addition to the stop-list is a Tremulant for the Great (lovely with the Stopped Diapason) and both tremulants have an gentle beat which is most alluring. Andrew Sixsmith’s improvements to the action and George Sixmith’s tonal finishing combine to ensure that the church now has a highly attractive instrument.

Reproduced with kind permission of the author - Roger Fisher.